Thank you for supporting Inspired Gift Ideas. We may earn a commision when you buy through links on our site. Learn more here. 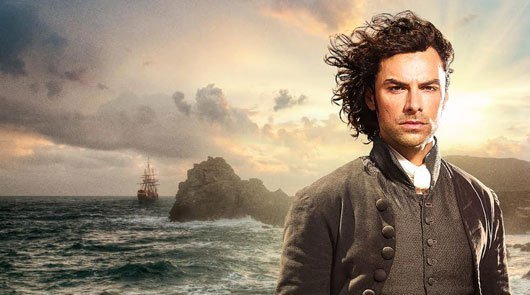 We must confess to having gone a little bit Poldark crazy here at Inspired Gift Ideas. There is something about Aiden Turner and the whole Cornish landscape that makes us quite weak at the knees. So we make no apology for this ultimate list of Poldark gifts.

The original books by Winston Graham

Where better than to start with the original 12 books written by Winston Graham. He lived in Perranporth and the Poldark books were inspired by the area that includes Perranporth, St Agnes, Illogan and beyond. The first book was published in 1945 and the last in 2002, shortly before Graham’s death in 2003. So as well as a cracking story the 12 books give the reader insight into the development of the Author over more than 55 years.

The story starts in 1783 when Ross returns from the American War of Independence, fully expecting to reunite with Elizabeth Chynoweth, the sweetheart he left behind. He is devastated to find her engaged to his richer cousin, Francis Poldark. The family all believed him killed in the war.

There have been a number of TV and film adaptations. The first BBC adaptation in the 1970s starred Robin Ellis and Angharad Rees. The latest series stared Aidan Turner and Eleanor Tomlinson.

What can we say? This adaptation leaves us quite breathless. We are not sure if its the lovely Cornish scenery or the lovely scenery that does it. There is fantastic attention to detail and some fabulous shots of Cornwall. Great characters, beautifully acted. One of the best Poldark gifts.

The last season in the latest series. This season strays from Winston Graham’s books and fills in the gap after the monumental events at the end of series four.

The original 1977 adaptation of Winston Graham’s famous novels. An interesting look back in time. A great cast of actors.

This adaptation gets very mixed reviews. It takes up where the original 1970s series left off.

This book has been updated by Winston Graham’s son Andrew and includes information on the first series of the recent BBC adaptation. The book has been described as a love letter to Cornwall, the county he made his home.

This beautiful edition of The Poldark Cookery Book, by author Winston Graham’s wife, Jean M. Graham, presents the recipes and the wherewithal for you to cook up your very own Poldark feast.

A Poldark-inspired colouring book, each stunning scene is full of intriguing detail to fire the imagination and make you reach for your colouring pencils. One of the best Poldark gifts to relax with.

The World of Poldark by Emma Marriott

A lavish companion book to the BBC 2015 adaptation. It takes the reader behind the scenes to the making of an 18th century period series. A brilliant Poldark gift that is on our Christmas lists.

Music from the first series can now be found in this Poldark CD. It features Eleanor Tomlinson singing folk songs including the song she Demelza sang on her first outing to Trenwith.

KEEP CALM AND CARRY ON SCYTHING (or Sighing!) Drinks Coaster

A cheap and cheerful fun Poldark present for the ladies who swoon over the scything scene.

Enjoy your favourite characters throughout the year with this calendar. It features high quality photographs of the major characters along with some biographical details. Sadly no topless photos of Aidan. Maybe next year….

Filled with official, iconic images from BBC One’s Poldark series one and two, The Poldark Colouring Book by Gwen Burns allows you to recreate the world of Poldark by colouring the pages in your own unique style.

No list of Poldark gifts could be complete without a Poldark mug. This is one of a selection, but our favourite as it features a moody Ross.

A 1000 piece jigsaw for those stormy winter nights. A colourful tableau of scenes from the TV series.

Treat the family to a cream tea to remember with this fantastic hamper, perfect for a picnic in the Cornish countryside

And a last cheeky Christmas idea inspired by the last scene in the sixth episode of the second series. Surprise your other half with these stockings and re-enact the sexy scene between Ross and Demelza. Happy Christmas!

How to get more Inspired Gift Ideas

We hope you enjoyed our list and found some gift ideas that will work well for you. We would love to hear your views on this list so please either let us know on Facebook or via this page. See new lists as they are published by following our Facebook page here. Want us to research a gift list for you? We would love to, so please let us know here. Want to find out more about us? Please read here.

We offer 1,000s of gift ideas and may earn a commission when you click through to sellers' sites.

Inspired Gift Ideas is a participant in the Amazon Services LLC Associates Program, an affiliate advertising program designed to provide a way for websites to earn advertising revenues by advertising and linking to Amazon.com, Amazon.co.uk and other Amazon sites.

This website uses cookies to improve your experience while you navigate through the website. Out of these, the cookies that are categorized as necessary are stored on your browser as they are essential for the working of basic functionalities of the website. We also use third-party cookies that help us analyze and understand how you use this website. These cookies will be stored in your browser only with your consent. You also have the option to opt-out of these cookies. But opting out of some of these cookies may affect your browsing experience.
Necessary Always Enabled
Necessary cookies are absolutely essential for the website to function properly. This category only includes cookies that ensures basic functionalities and security features of the website. These cookies do not store any personal information.
Non-necessary
Any cookies that may not be particularly necessary for the website to function and is used specifically to collect user personal data via analytics, ads, other embedded contents are termed as non-necessary cookies. It is mandatory to procure user consent prior to running these cookies on your website.
SAVE & ACCEPT